It was the custom of the times to treat a distinguished guest with marked attention; to receive him with a kiss of welcome, to provide water for washing the dust from his feet, and oil for anointing the hair of the head and the beard. All these courteous attentions were omitted by Simon. Jesus took His place, probably on one of the divans or couches on which it was usual to partly sit, partly recline, while eating…. Among those who entered Simon’s house while the meal was in progress, was a woman; and the presence of a woman, though somewhat unusual, was not strictly a social impropriety and could not well be forbidden on such an occasion. But this woman was one of the fallen class, a woman who had been unvirtuous, and who had to bear, as part of the penalty for her sins, outward scorn and practical ostracism from those who professed to be morally superior. She approached Jesus from behind, and bent low to kiss His feet as a mark of humility on her part and of respectful homage to Him.… As she leaned over the feet of Jesus her tears rained upon them. Seemingly oblivious of her surroundings and of disapproving eyes watching her movements, she shook out her tresses and wiped the Lord’s feet with her hair. Then, opening an alabaster box of ointment, she anointed them, as a slave might do to his master.

The Pharisee could not fail to note so direct a reminder of his having omitted the ordinary rites of respect to a specially invited guest. The lesson of the story had found its application in him, even as Nathan’s parable had drawn from David the king a self-convicting answer (James E. Talmage, Jesus the Christ, Salt Lake City: Deseret Book, 1915, 243–45). 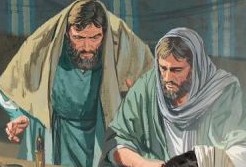