Bethlehem is the city of David, a small city overlooking vast fields not far from Jerusalem. Here in obscurity the Savior’s life would begin—here where King David was born, where he tended flocks and praised God upon his lyre; here where the boy shepherd was anointed to become King of Israel.

On the surrounding plains, shepherds tenderly cared for their sheep. Calling each by name, they gathered stray lambs into the flock, bound wounds, and guarded against the dangers of the night. But these were no ordinary shepherds—they were the keepers of the lambs without blemish, that would be used for temple sacrifices. To these faithful guardians, heavenly messengers came: the night, dark and still, was suddenly filled with glory and heavenly strains of music. The humble shepherds, overwhelmed with the vision, fell to the earth as an angel spoke and told of the newly born Lamb of God.

In Greek, Christ means the Anointed One: with the sacred oil of myrrh, sweet spices, men were anointed to be kings and offerings were made holy for sacrifice. Christ will one day appear as anointed King and Shepherd, but first He came as anointed Lamb, humble and meek, a sacrifice for our sins. He was born and lived among His sheep, suffering their pains, afflictions, and temptations, so that He might know how to comfort them. It is no wonder that shepherds were summoned to witness His birth(Toni Thomas, Come Unto Christ, 2013).

Mary and Joseph
Travel to Bethlehem

Shepherds Learn of
the Birth of Christ 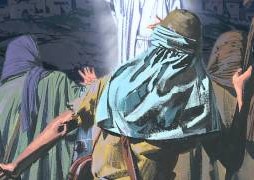