It is now a full year since John the Baptist began his public ministry; since he cried repentance in the wilderness of Judea; since he reprehended the Jewish multitudes, calling them a generation of vipers; since he immersed repentant souls in the Holy River, promising them a remission of their sins and the future receipt of the Holy Ghost under the hands of Him whose forerunner the Baptist was. It is a full year since the Lord’s forerunner first bore public witness that the mighty Messiah would soon walk among them, and that he would baptize them with the Holy Ghost and with fire.

It is now at least six months…since the son of Zacharias baptized the Son of God. And it is five or six months since the appointed Elias bore fervent witness that Jesus was the Lamb of God, which taketh away the sins of the world. And during all this time the promised forerunner has continued to prepare the way for the Promised Messiah….

We can be sure that wherever he met people, and as long as he had breath, his burning witness of one greater than he was given freely, boldly, and with prophetic zeal. … [T]his stern and impassioned prophet from Hebron and the Judean deserts, speaking by the power of the Holy Ghost—which gift he possessed from his mother’s womb—is opening his mouth to bear one of the most eloquent and powerful testimonies to find place in Holy Writ…. “He must increase, but I must decrease. He who cometh from above is above all” (Bruce R. McConkie, Mortal Messiah: From Bethlehem to Calvary, Salt Lake City: Deseret Book, 1979, 1:482-486). 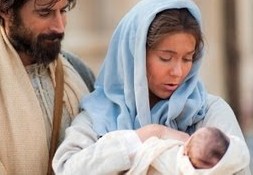 “Jesus Is
Baptized,”
A Story from
The Friend