Remembering that Jesus was now a “son of the law,” entitled to wear, if not wearing, the Tephillin or phylacteries, we can realize that he would not be under such strict supervision as when younger; he would be given greater responsibility and allowed greater freedom. Furthermore, maturity comes earlier in the tropics and near-tropics than with us, and Jesus would probably be allowed many privileges that amongst us would come three or four years later. It is not strange, therefore, that his absence from the group was not detected until the evening camp was reached, when Joseph and Mary, not finding him “among their kinsfolk and acquaintance,” returned to Jerusalem to find him….

There can be no doubt that Jesus had been deeply stirred by what he had seen and heard and done on this his first participation in the temple sacrifices and ceremonies of the Passover…. It can hardly be questioned that while his mortality put him under limitations (when they were not consciously thrown off), yet that mortality and its limitations did not dominate his divinity.

That Jesus deliberately planned to stay behind when the others went, can admit of little question. The record has no suggestion that his failure to go with Joseph and Mary was either a matter of chance or accident. Yet the episode given to us shows his remaining in Jerusalem was not from the wilful desire of the Youth for mere adventure…. One cannot escape the feeling that, notwithstanding his attendance at the feast, he yet had work now to do in the temple, that he knew he must now begin to “be about his Father’s business” (J. Reuben Clark, Behold the Lamb of God, Salt Lake City: Deseret Book, 1962, 154–55). 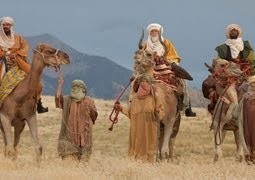 Young Jesus Teaches
in the Temple 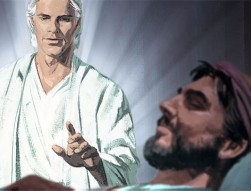 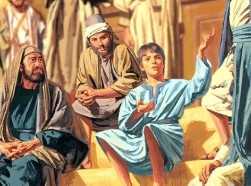